JMI flyer (with pricelist on reverse) sent out in October 1961. The full page is here.

The first public announcement of the new Super Twin came in "Melody Maker" magazine, 28th October, 1961 - the "Super Twin de Luxe" at 125 guineas (£131 and 5 shillings): the speaker cabinet with 2x12" Celestion blue drivers (T530) and a closed back (to help the speakers cope with bass frequencies), and a separate amplifier section.

As the JMI typescript flyer signals, the new AC30 had been issued first to Adam Faith and The Shadows to try out and "feature".

Early units were slightly different from later production models in at least one respect. Grille cloth covered the whole of the speaker cabinet front (a "valance" front), as one can see in the picture below: 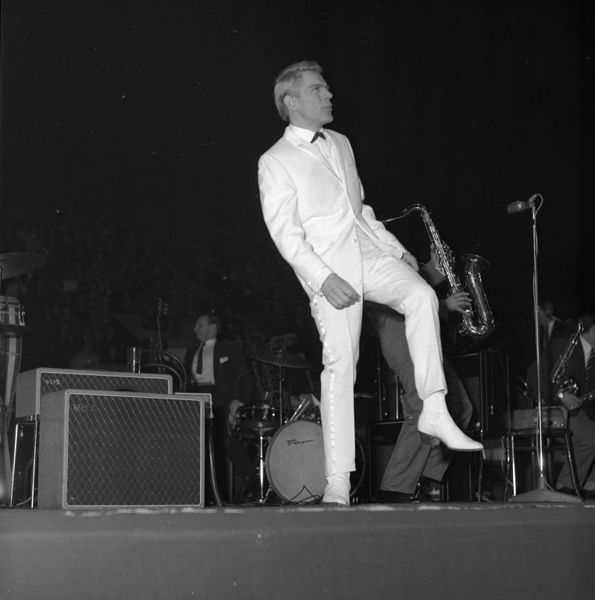 Standard later Super Twins (in common with AC30 Twins) had a split front. Possibly the speaker cabinet belonging to Faith's band was a pre-production unit - but it may be that small numbers of early units had full valance fronts. 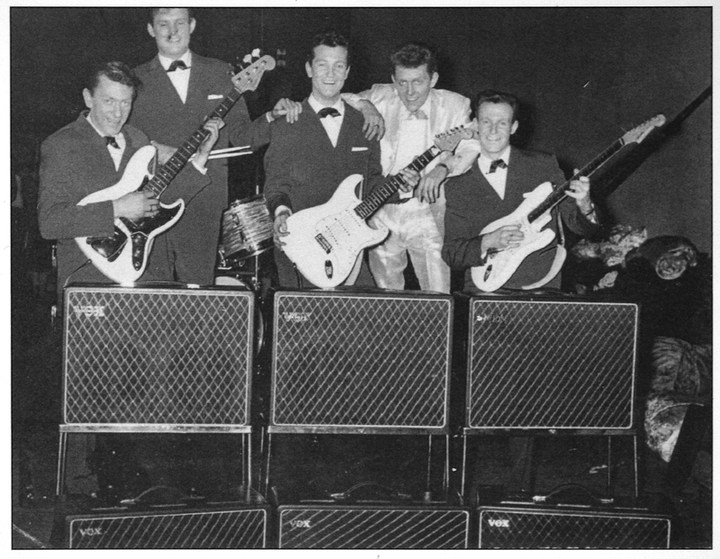 Initially amplifier sections had the new top boost circuit with controls (treble and bass) provided in a cut-out on the back panel. Later, top boost became an option rather than a standard fitting.

In May 1962, JMI advertised the new Super Reverb/Twin/I and Super Reverb/Twin/II. Controls were on the back panel in a cut-out; reverb pan and driver transformer mounted on the underside of the amplifier's slider board. Early examples are scarce.

The controls on the back panel of AC30 Super Reverb Twin serial number 2803.

The first Super Twins (Is, IIs and early SRTs) had serial numbers in the high 4000s, and they were numbered in sequence with plain AC30 Twins through to around serial number 10000. The highest known at present is number 9979 - see below. Thereafter Super Twins were given a sequence of their own beginning at 2500.

Cabinets were covered in both beige and black pebble covering early on; handles were leather, one apiece for speaker cabinet and amplifier section. Beige gradually gave way to black. Injection moulded rubber handles came in around serial number 7000.

If anyone knows of further early Super Twins that should be incorporated on this page, do let me know.

Serial number 4969 B - currently in Germany

An early AC30 Super Twin amplifier section. The "6" on the serial number plate is actually an upside down "9". Possibly the original black covering. Sold at some point by Freedmans of Leytonstone (London). The main Hunts filter cap in the preamp has the date code "HSW" = 25th week of 1961; the smaller blue bypass cap has "HWW" = 21st week of 1961. Note that amps covered in black occasionally had black plastic corner protectors. Amps covered in beige had none.

Serial number 5002 N - formerly in Italy, currently in the UK

An early Super Twin, grille cloth replaced, and probably and old recovering. The speakers in the cabinet are from late December 1961. Chassis assembled by Westrex. In the power section: the main Hunts filter cap. has the date code "HSW" = 25th week of 1961. The blue Hunts 32uf cap. underchassis has "WYW" = 10th week of 1961. AC30/6 schematics indicate a 8uf underchassis; but most amps have 32uf. The Welwyn 22K resistor has the date code "SE" = May 1961.

Super Twin amplifier section serial number 5156N (probably late 1961 / early 1962. In common with serial number 5002 above, the chassis has the phantom cut-out for the rectifier valve. Thanks to David for the picture and info. Further pics to follow. 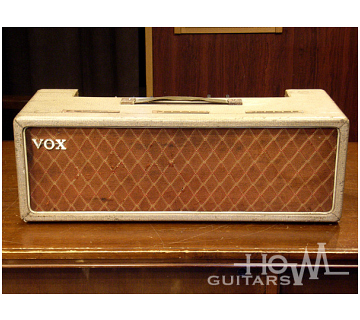 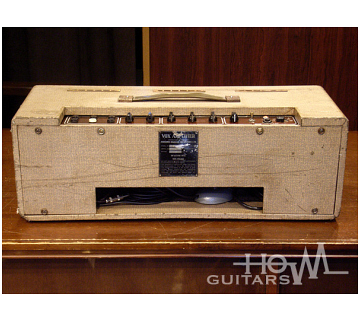 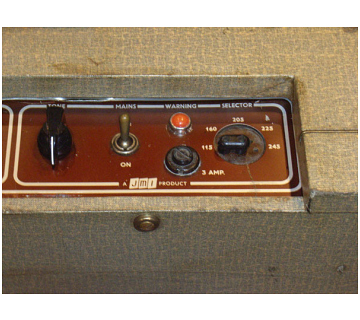 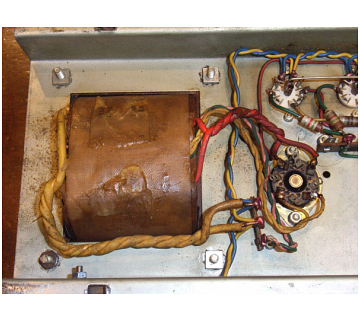 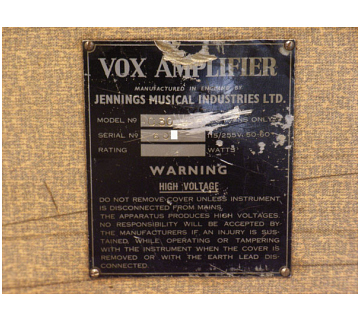 Recently sold by "Howl Guitars" in Tokyo, an early Super Twin amplifier section, beige cloth, early 1962. The amplifier chassis, made by Westrex, has Haddon transformers, the earliest type of copper panel, white EL84 sockets, and the phantom cut-out for the rectifier valve. The serial number plate, with its three long panels and peculiar attempt at hand stamping, a later addition to this amp however. 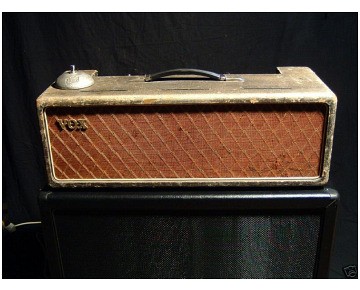 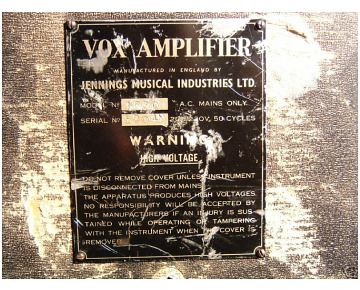 Pictures from 2006. A Super Twin amplifier section with its original footswitch. Transformers are Haddons. No back panel Top Boost.

A nice Super Twin with top boost on the back panel. Chassis assembled by Westrex. Transformers are Albions. In the preamp, there are several black WIMA Tropydur capacitors still in place. The blue Hunts capacitor in the second but last picture has the date code "YAH" = 9th week of 1962.

Older pictures of the set.

An early Super Twin with original cover for the amplifier section. Chassis assembled by Westrex. Transformers made by Albion: OT is part no. OH083/DT; mains is OH114/DT; and the choke PE241/DT. An add-on top boost circuit has been added (controls on the amp's back panel).

A Super Twin head. Good to see some of the original black WIMA Tropydur capacitors still in place. The original footswitch is present too. 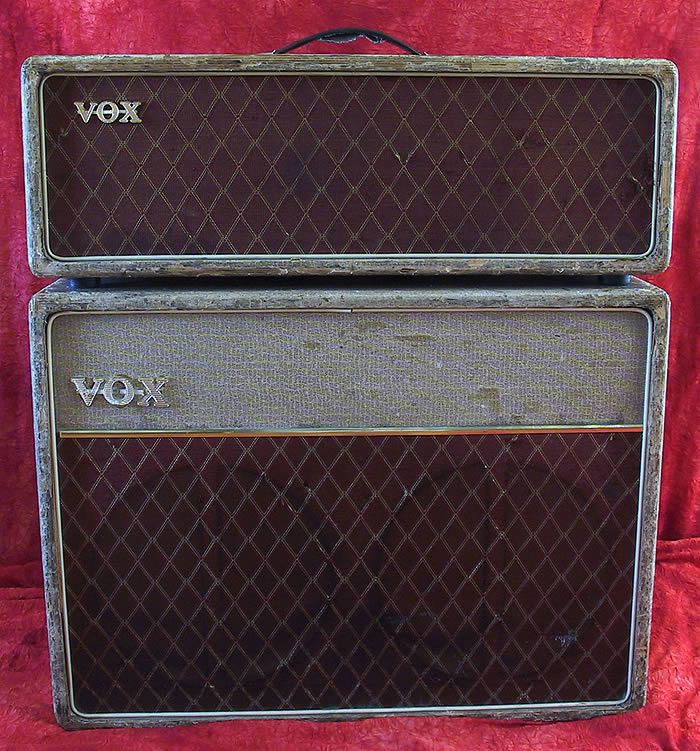 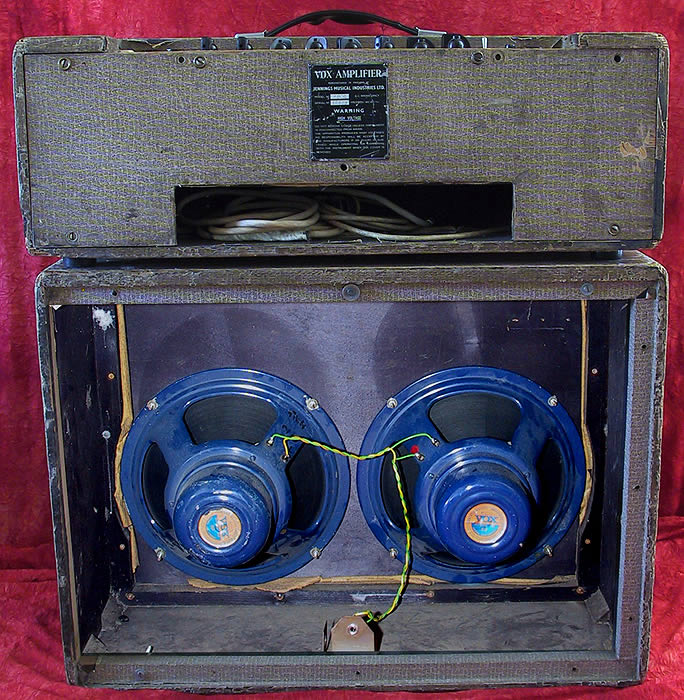 A fantastic early twin, pictures just a little too small to make out the serial number. Some fabric has been added inside the speaker cab (to help reduce vibration). 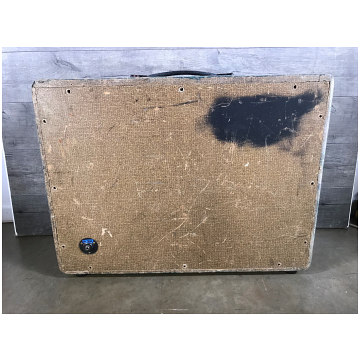 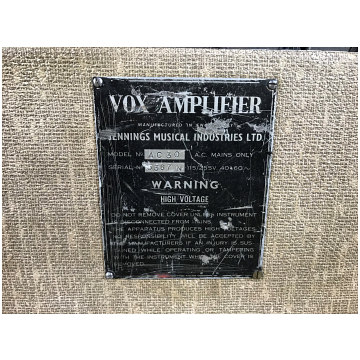 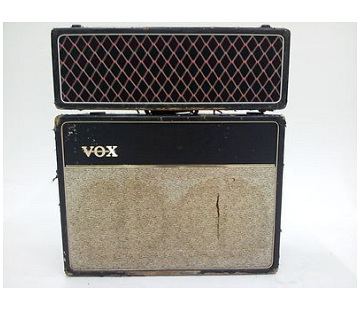 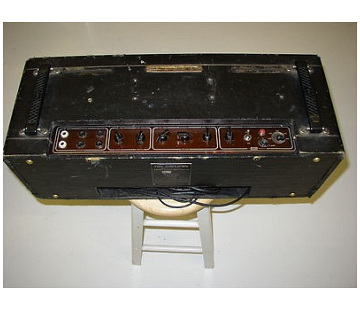 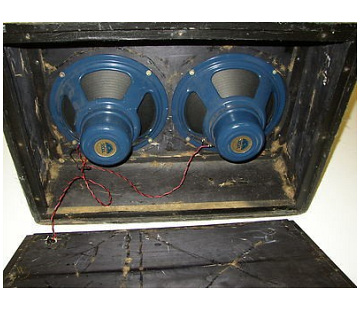 Smooth black/charcoal vinyl. New handles and grille cloth on the amplifier section. The date codes on the Celestion blues are 01KH and 14KH = 1st and 14th September 1963, considerably later than the amplifier and probably the cab (assuming amp and cab go together). Note that the speakers have been out at some point and rotated by 90 degrees - normally the Vox logo is horizontal.

A good solid looking Super Twin, probably a Super Twin II originally (note the too factory-made holes for speaker connectors), some readjustment on the serial number plate though.

The AC30 Super Twin amplifier section cabinet with this serial number on its plate now contains an AC30 chassis from 1964 (marked in red "T" for Treble). 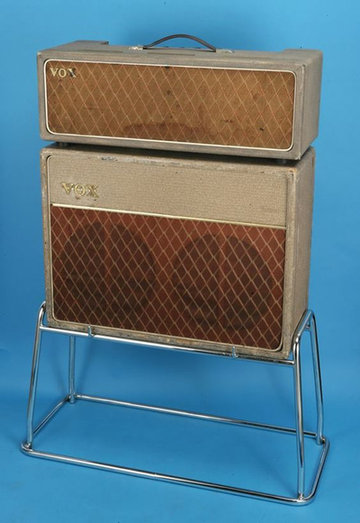 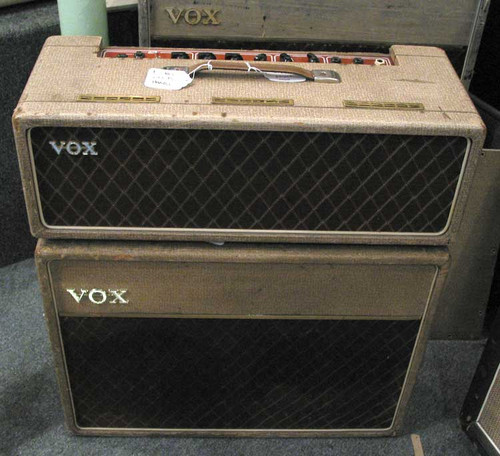 Speaker cab missing its handle. The cabinet of the amplifier section has distinctive discolorations on its top.

Note the plastic (rather than leather) handle.

Serial number 6313 - currently in the USA 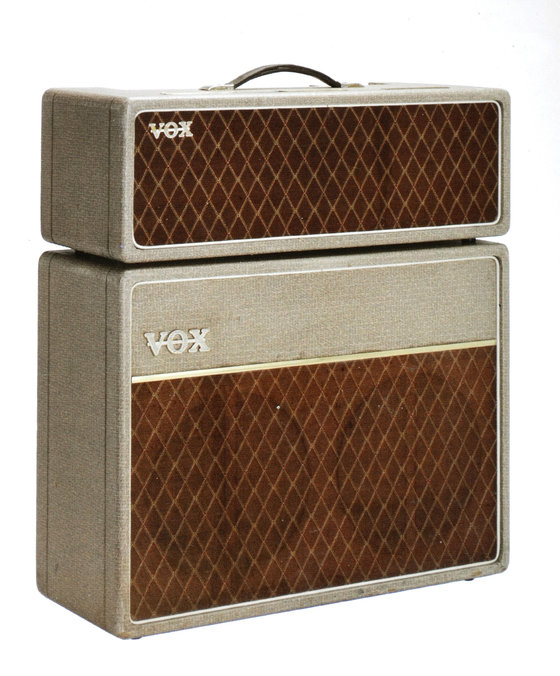 So far very few Super Twins with serial numbers known with certainty to be in the 6000s and 7000s have come to light. Perhaps some of the unknowns above belong to those numerical ranges. 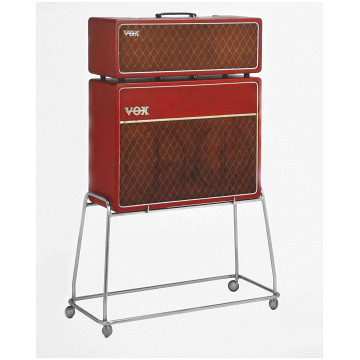 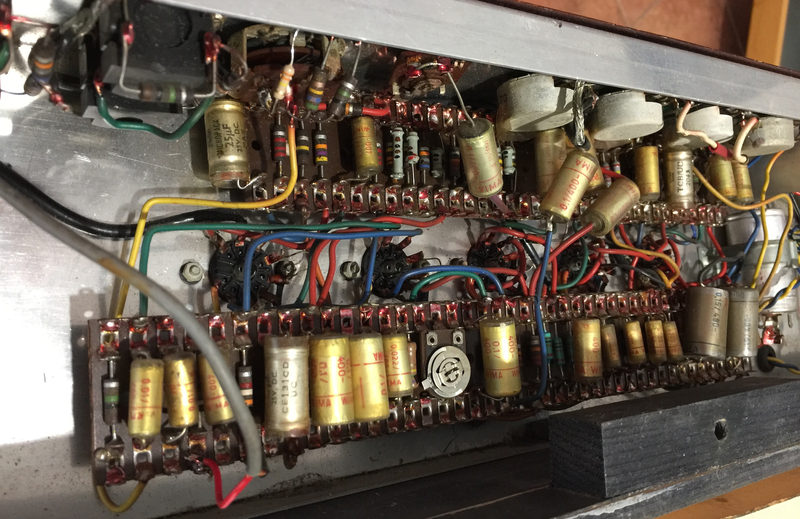 The amplifier section of a Super Twin. Black "dimpled" or "pebble" vinyl. Chassis assembled by Westrex. Mains transformer replaced. The gold-coloured TCC bypass caps in the preamp have the date code "UC" = March 1963. 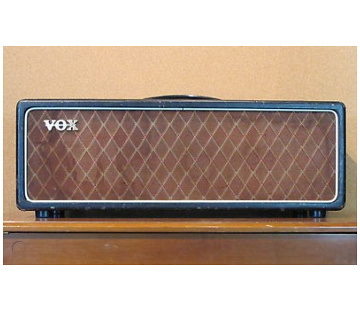 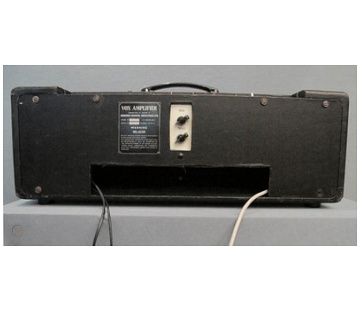 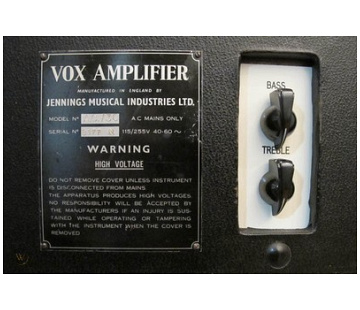 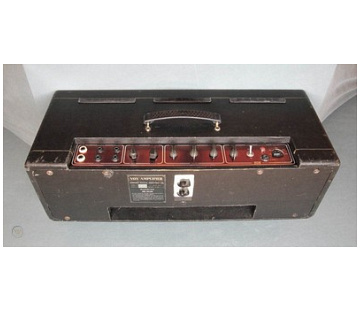 Top Boost added on the back panel at factory. Pebble (dimpled) vinyl.

Serial number 8368 - currently in the USA 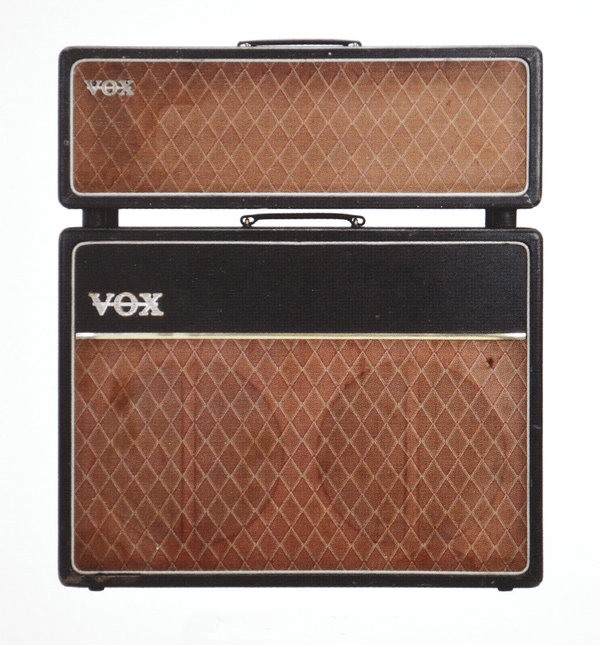 Possibly originally a Super Twin II. Note the double speaker sockets on the back panel - now replaced with jacks.

Basketweave vinyl. Both amp and cab have features which generally come in later - black vents and silver alnico speakers.

Serial number 9885 - currently in the UK

Serial number 9952 - currently in the UK

Serial number 9979 - currently in the UK

With an original set of covers. Top boost controls on the back panel of the amplifier section. The speaker cabinet appears to have been rewired.

Note the integral top boost controls in the copper panel.