The AC30 Super Twin as represented in the JMI dealer's catalogue of early to mid 1964. It should be said that very few Super Twins at this date will have looked like the one depicted. Most (if not all) speaker cabinets had split fronts.

In 1964, JMI embarked on a massive stepping up of production. Demand was increasing exponentially. Something in the order of 7,000 AC30s were produced during the year, a proportion of which were naturally Super Twins, and Super Twin Reverbs.

The chassis that went into Super Twin amplifier cabinets seem as a general (though not infallible) rule to have been those assembled for JMI by Westrex.

Earlier Super Twins are on this page; and early Super Twin Reverbs (with rectangular rather than trapezoidal amplifier cabinets) can be found here.

A little way into 1964, the Super Twin was given its own numerical sequence - beginning with serial number 2501. At much the same time the AC30 Expanded Frequency model was given its own sequence too. Now and again one finds, however, Super Twins with numbers that should, strictly speaking, belong to Twins - no. 12635 for example (included below). Errors of this nature doubtless crept in from time to time, though one must always allow for the swapping of chassis, boxes and plates in later decades of course. But generally one can tell - in these latter cases the disparity between serial number and the cosmetics and electronics of the amp in question are normally readily apparent.

Just to note that model and serial number are still hand stamped. "N" stands for normal voicing, "B" for bass, "TB" for "Top Boost", and "T" for Treble. On the treble circuit, see this page.

Cabinets are for the most part black (i.e. aside from custom colours), the covering being basketweave vinyl. One still finds pebble (dimpled) and smooth black vinyl though. Grille cloth is brown at first. Black comes in periodically later, beginning with serial numbers in the high 2700s. But the change from brown to black cloth took some time to work through, as did the change from copper to grey control panels.

Full swivel trolleys were introduced in late 1964 / early 1965, though generally (operative word) only for AC30 Super Twin Reverbs. The earliest have a rectangular "basket" on top, wider than the parallel bars, to support the amplifier. Survivals are extremely scarce. Later one finds "standard" trolleys with plain parallel bars. The "basket" was phased out due to cost.

In late 1964, another solution was ventured - the amplifier (note the sloping sides) supported by small chrome brackets. But so far as one can tell, this never went into production:

Finally to note that AC30 Super Twins designated as "Treble" models on the serial number plate come in in the high 2600s.

If anyone knows of further early Super Twins that should be incorporated on this page, do let me know.

Grille cloth replaced - currently Rose Morris (from the 1970s). Albion transformers. The serial number plate has at its head "AMPLIFIER" rather than "VOX AMPLIFIER". The number itself overlies a first effort at stamping.

Note the discoloured serial number plate, typical at this point of production.

Basketweave vinyl; brass vents on the box. No red dye on the solder joints, so probably assembled by Burndept. Albion transformers and Parmeko choke. One of the blue Hunts cathode bypass capacitors has the date code "WTT" = 14th week of 1964. Mullard mustard capacitors have the date "B/64" and "B4N" = second quarter of 1964. 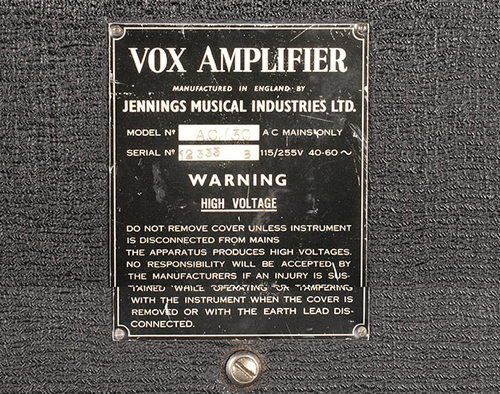 Was number 12051 stamped in error for 2501? - unlikely given the amps immediately below

Another Super Twin, normal voicing. Transformers are Albions. The chassis is likely to have been assembled by Westrex.

A further instance of a Super Twin with a number that would normally be reserved for a Twin. The voicing is given as Normal ("N"). The cab was said to contain "silver bulldog" speakers - ie. Celestion T1088s. 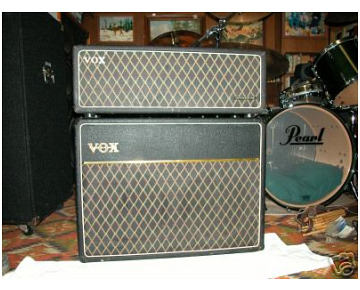 As below, a Super Twin with a serial number in the Twin sequence.

A Super Twin, its number in the main AC30 Twin sequence.

Serial number 2509 B - currently in Europe

Serial number 2541 - currently in the UK

Albion transformers. "TB" (Top Boost) indicated on the serial number plate, though the controls themselves have been removed.

Serial number 2562 - currently in the UK

Currently (April 2020) on ebay.uk. A grey panel chassis with in panel top boost - probably original to the box though it could have been slipped in later. There are two similar chassis with consecutive serial numbers below - nos. 2798 and 2799.

The only change a replacement handle; excellent condition externally. Thanks to Robert for the pictures.

Marked as "Top Boost" on the serial number plate, the controls still on the back panel.

Currently (April 2020) for sale in Germany. Normal voicing marked on the plate "N". "Westrex Treble" is stamped on the aluminium of the preamp. Details of the preamp show that this is indeed a "Treble" model. The Celestion blues have date codes 24FH and 27FH = 24th and 27th of June 1963. 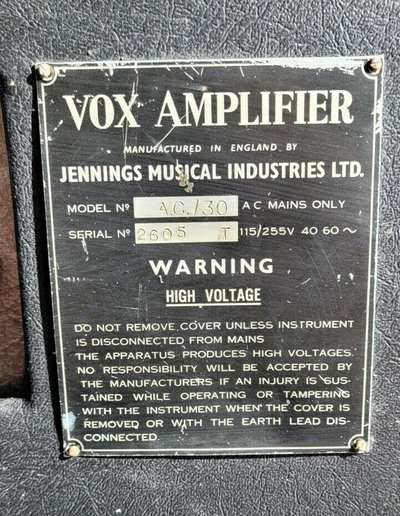 Sold by Gardiner Houlgate (auctioneers) in 2012.

Serial number 2681 B - currently in Europe 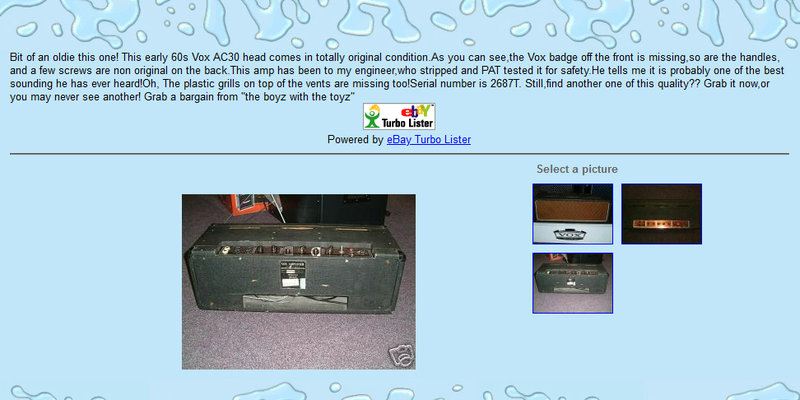 Marked on its serial number plate as being a "Treble" model.

Serial number 2690 - currently in the Netherlands

Currently (April 2020) for sale in the Netherlands. Top boost controls on the control panel. Transformers made by Albion; chassis assembled by Westrex.

Accompanied by a speaker cabinet (unlikely to be the original) with alnico blues dated 21st May 1963.

Chassis no. 5214. Grey panel with integral top boost; brown grille cloth; link voltage selector. The original burgundy covers survive. The filter cap. visible in the preamp has the date code "WHT" = 12th week of 1964. Note the presence in the preamp of a number of Mullard "mustard" caps (which look to be original).

Serial number 2798 - currently in the UK 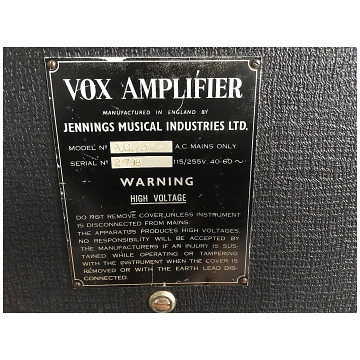 Serial number 2799 - currently in the UK 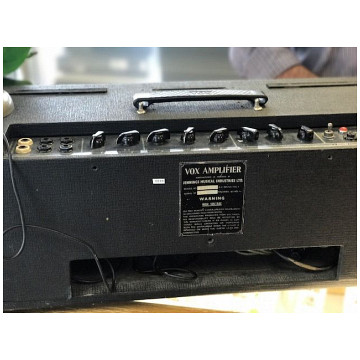 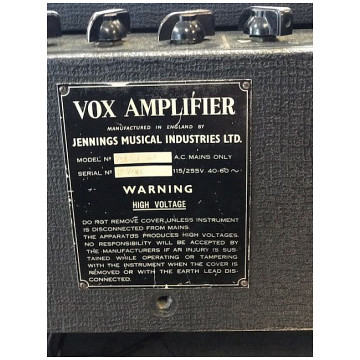 Serial number 2833 - currently in the UK

Serial number 2838 - currently in the USA

Brown grille cloth and copper control panel. The speakers are Celestion silver T1088s. One has been mounted with its label vertical rather than horizontal.

The hand stamped serial number is followed by "SR" which should mean "Super Reverb", but there is no sign that there was ever a reverb tank, nor does the back panel have the requisite controls. The chassis assembled by Westrex. Albion transformers and choke; gold-coloured WIMA Tropyfoil (Tropyfol) signal capacitors throughout the preamp; gold-coloured TCC cathode bypass caps.

Serial number 2899 - currently in the UK 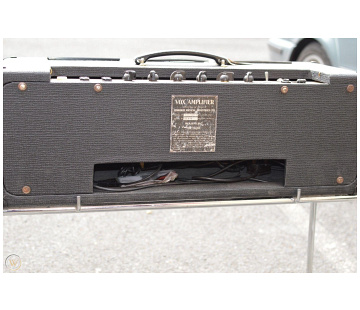 Brown grille cloth and copper control panel. Albion transformers. Slightly difficult to see, but the preamp is apparently stamped "Westrex Treble". The second set of pictures from a second sale of the amp.

Serial number 2901 - currently in the UK

Chassis number original stamped 0475 - changed to 04476. Grey panel with integrated top boost. The mains transformer (with the Lemark label) is a replacement from a later amp.

A good original Super Twin. Parmeko transformers. The Mullard mustard capacitors in the preamp have the date code "B4N" = second quarter of 1964. Blue Celestion T530s still. The amp was probably made early in the last third of 1964. Thanks to Neil for the pictures.

Chassis assembled by Westrex. Albion transformers and choke. Signal capacitors in the preamp are gold-coloured WIMA Tropyfoil (Tropyfol). Originally sold by Johnson Electronics (Lesjay Limited) in Sheffield, which seems to have done good business with AC30s.

Smooth dark grey vinyl. Albion transformers; chassis assembled by Westrex and marked "Westrex Treble". Thanks to Glen for the pictures.